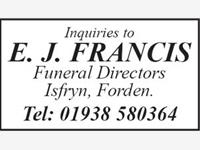 Light a Candle
Originally printed on September 10, 2019 in the Shropshire Star.
Viewed by 113 Visitors.

Passed away peacefully at the Royal Shrewsbury Hospital on Monday, September 2, 2019, aged 90 years.

Funeral arrangements to be announced later .

thank you for choosing to leave a donation. Donations are handled via JustGiving and you will be re directed to their site to take secure payment.