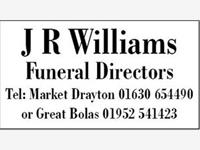 Light a Candle
Originally printed on July 31, 2020 in the Shropshire Star.
Viewed by 470 Visitors.

Passed away peacefully at the Royal Shrewsbury Hospital on July 18, 2020, aged 94 years. Former General Practitioner in Wem, loving Husband to Joyce, devoted Father to Jeremy and David, Father-in-law to Dawn and Grandad to Emma and Kate. He devoted his career to the people of Wem, and will be forever in our hearts.

In line with current restrictions, a private Funeral Service will be held at St Peter's and St Paul's Parish Church, Wem on August 3, at 12 noon. The cortege will pass through Wem High Street at 11.45am should anyone wish to pay their respects. A Memorial Service will be held at a later date. Family flowers only but any donations would be gratefully received for the Robert Jones and Agnes Hunt Orthopaedic Hospital, Oswestry, to be sent to the Funeral Director.

31 July 2020
Please accept our condolences at this difficult time.

Donated to Alzheimers Society on 01 Aug 2020